Archive for the ‘Growth Mindset’ Category

Being an avid reader of @mathsjem’s resourceaholic blog, especially her maths gems, I’m often inspired to try something out.  This time, from gems 30, was the homework expectations. I still get frustrated by pupils lack of presentation skills, despite reminding them of our school’s presentation for learning rules (which are in a bullet point list).  It’s not just following the rules, but the attitude it reflects in their learning, and therefore the expectation of achievement they give themselves.  I hope that if I expect excellence, then pupils can achieve excellence!

So for me to expect excellence in their presentation, I don’t just want a list of rules, but a model to what excellence looks like.  I will start trialling using this model in the next few weeks (with a tweak or two to the design and colours) with the aim of launching it with my classes in September, and a focus on presentation for learning in those first few lessons and home learning.

2nd August: Attached below now is the updated version, which includes presentation target codes for the pupils, as presented by @letsgetmathing at mathsconf4. 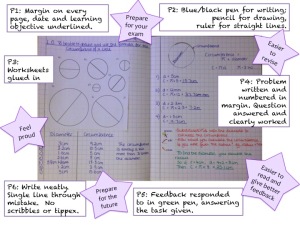 Having read the blog post from Meolscop High School: Shuffling Sums, about First Attempt In Learning and Second Attempt In Learning, and then meeting the lovely @missfilson at mathsconf15 and hearing more about her department’s work on growth mindset, I was inspired to give it a go with students at my school.

The first introduction was with a year 7 group who had been constructing triangles using ASA. I gave them the following problem asking whether students would construct identical triangles if they were gien only angles. 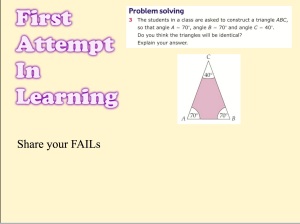 Some students were thinking about it straight away and were happy to write down their opinions, but there was a significant amount of students who were reluctant to write anything down because they didn’t know the right answer. It was important to spend time explaining to the students that I was interested in their thoughts and not whether ther answer was right or wrong. At this point I also said that they may want to write a sentence or try constructions to help them come to an answer. For this first attempt, I wrote individual hints in their books to give the students support towards their second attempt. I also wanted to help students feel ok with not getting the right answer the first time, and to share with each other their “FAILs” and hints. 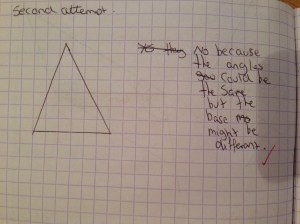 I also tried this with a year 9 group working through ratio and proportion. Students were gven the miles/km conversion lines and asked to complete any missing values they could. Again, students found it difficult to attempt anything to begin with as they wanted to know the right way to calculate the amounts, but after some encouragement, most students made their first attempt.

Looking through students first attempts, they’d all had a go at a valid method, so with support would be able to continue along their line of thinking. This time, instead of giving individual hints, I grouped the feedback into the three methods they’d attempted:

1. Putting values against each step on the double number line

2. Recognising where the miles value had doubled, so doing the same to the km

3. Finding the relationship from miles to km 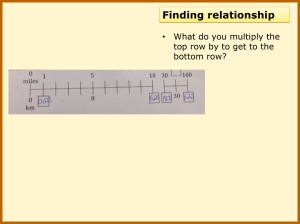 I reviewed these methods with them as a whole class, and gave them the option of continuing with the method they started with, or changing to a different method. Some results are below (the final student being keen to make corrections corrected her first attempt before rewriting onto the second!) 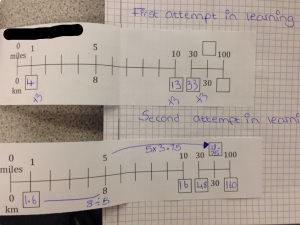 From this work, it is evident to me that students find it difficult to grasp the mindset of attempting something without knowing if they are “doing it right”. This won’t change overnight, but the failing and sailing is another step towards developing growth mindset within my maths classroom.