Preparations for starting a new school

For the first time since starting my NQT year in 2008 I’m moving school.  In 4 days I’ll be starting at a new school, with a role in Teaching and Learning across the curriculum.  I know it’s the holidays, but for me I need to be prepared for my new school, so I’ve been spending some of the last couple of weeks getting myself ready (I did make sure to have a good break in the first four weeks of the holidays!!).

Most of my preparation has been about familiarisation.  I’ve popped into my new school a few times for short periods so I am familiar with my surroundings.  I know my way much better along the corridors; essential so I’m not looking like a lost puppy during my first week. When logging onto the email system I was greeted by 120 emails! I had been added in early July, so I did spend some time reading through some of the emails that helped me get a better feel for the school and leadership.

It’s been good to meet some of the people working at the school during the holidays.  I’ve met (and had a quite a bit of help from) the network manager, two of the caretakers and a couple of the student services team.

And of course there’s my classroom.

I was lucky that the notice boards were left with displays on, and that the classroom had been painted over the holidays, but I also wanted to make my own mark on the classroom, and put up displays that would both be useful and interesting.

Ideas and resources have come from Artfulmaths.com (flow chart, squares and cubes, mistakes quotes, faces behind the formula), Missbsresources.com (vertical number line, shape and formula bunting), and solvemymaths.com (Mr Men).  I don’t know where the prime number caterpillar originated as my job share colleague put it up in our old room, and after she retired, I had to bring it with me.  The fractions, decimals and percentages were an idea I saw at my son’s school. 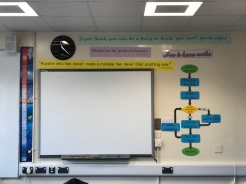 Pride of place above the whiteboard is my maths clock, a present from my maths department at my old school.

EDIT: Twitter and @MrReddyMaths have linked in where I’ve seen the “Be Kind, Work Hard” mantra before.  It’s from King Solomon’s Academy, “Work Hard, Be Nice”, taken from KIPP schools in the US, who got it from Race Esquith (Teach Like Your Hair’s on Fire).

The (almost) final part of my preparation has of course been for the students and their lessons.  Although I know my timetable, I do not yet have any information about the students I’ll be teaching.  This will be a priority during the first couple of days, to get as knowledgeable as I can about these students, both from their previous teachers and from the data that is available for them.  Until we meet as a department, I also do not know the full expectation of the first lesson; whether I’m to go straight into the scheme of learning or can have an introduction lesson.  Ideally I’d like a lesson where I can set an easy access but high ceiling challenge as part of some time to get to know the students and for them to learn about my expectations and routines.

I have viewed as much of the scheme of learning as possible for my classes and started to prepare lessons for the first week.  I always like to prepare for the week ahead, with the flexibility to adapt when necessary as the week goes through.  As well as looking through resources I’ve used to teach these topics before, I’ll be visiting my favourite websites for any inspiring resources that cover the learning objectives: www.resourceaholic.com, don steward.blogspot.co.uk, mathspad.co.uk to name a few.

Summer reading this year has been The Confident Teacher by Alex Quigley.  It was a book used by my new school last year.  I’ve still got a bit of it to go (the first four weeks I took the opportunity to read novels, something I don’t get much time for), but so far there are some great nuggets to take away from it.  I’ve also continued listening to Mr Barton’s podcasts, and have just finished the interview with Robert and Elizabeth Bjork on Memory, Forgetting, Testing and Desirable Difficulties.  Again, fascinating! One of my objectives for this year has to be to put to practical use the research about interleaving and spacing.  I need to reread Damien Benny’s blogpost on this as a starting point.

And finally there was Summaths! Meeting up with twitter maths teachers for a summer social was both a great way to relax and motivate for the upcoming year.  Jo Morgan (@mathsjem) had arranged an excellent day out with Tom Briggs (@teakayb) at Bletchley Park.  Tom ran four different sessions about cryptography, and the two I went to reminded me of the Turing Cryptography challenge we did a couple of years ago for some year 7 and 8 students, which would be great to do again.

My absolute favourite part was finding out more about the Enigma machine, and I actually got to have a go on it too! It fascinates me both how it works and how the codes were broken.  It was great to meet some more maths twitter folk (@arithmaticks, @mrsmathematica, @emmaemma53, @amercertbs and @travellingblue to name a few) as well as catch up with those I’ve met a few times (@rjs2212, @ejmaths, @solvemymaths).  The quiz was, as always, hard but fun and I was kicking myself on the cryptarithm as I was just 2 numbers away from solving it but forgot about 0!!!  My husband and boys met us for the evening meal as they were staying over too ready for a bank holiday day trip to Gullivers!!