In September 2015 I inherited a foundation year 11 class.  The class had previously had low achievement levels and included a few pupils (at least 50% if I remember correctly) with SEN. We struggled during the first half term, particularly with getting maths notes and examples written in books.  I was printing out an awful lot of write on worksheets and gluing them into books.  I then read @mathsjem’s post on resourceaholic.com about her foundation group in which she wrote about the folders she used to organise their work and study packs for each lesson.  See her updates on this here and here.  I thought this would be an ideal way of working with my year 11 group, particularly in supporting their note taking, so many thanks to Jo for introducing me to this plan.

The ring binders were such a fab idea, and it just so happened that at the very point I was thinking about this, a friends workplace were closing down and skipping a load of lever arch ringbinders, which she kindly collected for me.  Perfect!

Two years on, and it appeared so successful after the first year, that I repeated it last year with a similar year 11 group.

I’ve added a page with the folder sheets I have used over the last couple of years.  I’ll admit I’m quite anxious about putting them all on as I know I’ve used resources that others have kindly shared.  I’ve gone through and deleted resources that are from subscription or prominent sites. I’ve linked to TES resources I’ve used from there, but I’m still worried I’ve missed something that someone else took their time to create, so please accept apologies in advance and let me know if I need to credit you.

The first benefit of the folders is the organisation of the students work.  We had 5 sections: Classwork, Homework, Assessments, Practice Papers and BBQs (more on those later!). It’s great to sling the assessments and past papers into after the follow up work.

For the classwork, I prepared a page, usually double sided, for each lesson, with the learning question already written on.  I also decided to number the sheets with unit and lesson number on!

The real bonus of these sheets is that notes can be laid out for better referral back to them, and all the questions are already on there, so no glueing in! They tended to get a pattern of boxes for facts and speech bubbles to annotate examples.

Although it took time to make these sheets, these were the resource for the lesson.  I didn’t make a powerpoint to go with them, as I used the visualiser I was lucky to have in my classroom.  It wasn’t just a “copy these notes down”; as I was filling them in the same time as the students, it was all about the questioning too.

The BBQs are my starters I use.  They stand for bread and butter questions; I first used Just Math’s bread and butter questions here, but then I wanted to use certain questions for my group, so developed my own. At the start of the year, I chose a selection of questions and then for four lessons in a row they would do the same set of questions (different numbers!).  However, once we started doing papers, whether in class or for homework, I would choose mostly fluency questions which most of the class had got wrong, so the first session has more guided questions and then the next 3 would allow for further practice on these areas.  Next job is to upload these! 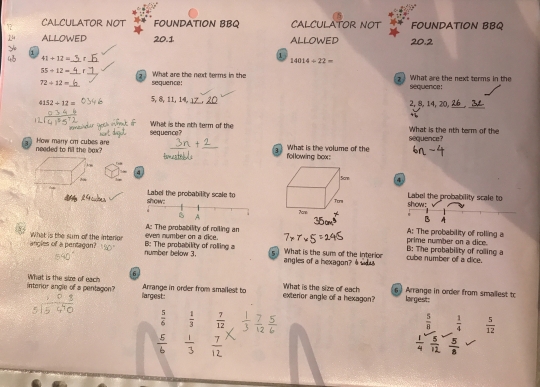 I would totally recommend using folders for GCSE work.  I would imagine if I were to do these with a higher foundation group, or a higher group, then I would leave more blank spaces for the students to make their notes, rather than the prescriptive layout I’ve been using with the groups I’ve had.